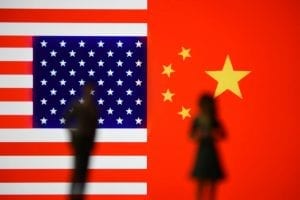 Over the past year, the world’s two largest economies have imposed tariffs on billions of dollars worth of one another’s goods. US President Donald Trump has long accused China of unfair trading practices and intellectual property theft. In China, there is a perception that the US is trying to curb its rise.

Trump’s tariffs policy aims to encourage consumers to buy American by making imported goods more expensive. So far, the US has imposed tariffs on more than $360bn of Chinese goods, and China has retaliated with tariffs on more than $110bn of US products. Washington delivered three rounds of taxes last year, and a fourth one in September. The latest series targeted Chinese imports, from meat to musical instruments, with a 15% duty. Beijing has hit back with tariffs ranging from 5% to 25% on US goods. Its latest tariff strike included a 5% levy on US crude oil, the first time fuel has been hit in the trade battle.

The point is to punish China by making Chinese products more expensive for American consumers and businesses to buy. If Chinese products suddenly become more expensive, they’ll buy those same products from somewhere else, and Chinese companies will lose money. China immediately accused the US of starting “the largest trade war in economic history to date.” The Trump administration initiated these tariffs after concluding an investigation into some of China’s most controversial trade practices. The US’s new trade barriers are designed to penalize China for doing things like forcing foreign businesses to hand over their most prized technology to Chinese companies — many of which are state-owned — in exchange for access to their market.

Both US’s and China’s initial round of tariffs against each other are designed to sting deeply. The US is targeting high-tech Chinese goods to put economic pressure on Beijing’s “Made in China 2025” program — a Chinese government initiative to transform China into an advanced manufacturing powerhouse. China has deliberately targeted significant US agricultural exports like soybeans that come from states in the heart of Trump country, where neither the president nor his party wants to see economic instability or job losses.

Both sides have threatened to take more action with new tariffs and hikes to existing duties in the coming months. On 1 October, the US plans to raise a current 25% tariff on some Chinese products to 30%. Washington then intends to deliver a wave of new tariffs on Chinese goods, ranging from footwear to telephones, on 15 December. If this happens, effectively all Chinese goods imported to the US will be subject to tariffs. China also plans to hit another 3,000 American products with tariffs by the end of the year.

Negotiations are ongoing but have proven difficult. The two sides remain far apart on issues including how to roll back tariffs and enforce a deal. The uncertainty is hurting businesses and weighing on the global economy.